While behind the scenes many people are working hard to make the Geocoinfest Europe 2017 a success, I would much like to give already now some information about the OrgaTeam. The request to answer the invitation of Guido Beckers to host the Geocoinfest positively was only done after five people were willing to commit to this project and who make up the board of the organizing committee.

Firstly, the trio johnny lightning, LordT and spockske. Who are these guys?

LordT (middle) is a more moderate geocoin lover and likes “watching the pennies”. His sense of efficiency and his talent for details make him the right person to take the role of treasurer of the BGA.

spockske (left) is a geocoin designer who, for still unknown reasons, was asked to organize the geocoinfest 2017 and in his role as president has the ultimate responsibility for its success.

All three have in common only one thing, they are most of all geocaching addicts as the picture above illustrates clearly.

Two people completed the trio on the board, number 27 and MuYbJeN, respectively, the legal adviser and the coordinator.

nummer 27 loves mountain caches, multi’s and wherigo’s. Clearly, it’s the walk that motivates her but she enjoys of course the places where geocaching brings you.

MuYbJeN, is responsible for proper coordination between the various working groups. An elusive task but all the more important.

There are also 5 other committee members who each carry a final responsibility that is very important in itself for the success of the event because it will be on these aspects that the participants will evaluate the event as successful or not.

Gunter67, our technical specialist should ensure that no one knows that he was there, and if there is something wrong technically his fast service should make people forget the defect immediately.

YouryDW is the man who makes sure that all pre-event processes with participants run smoothly: listing, shop and website. Hard to imagine running a mega without him.

teekitizi has experience with managing merchandising and will negotiate and manage the deals with suppliers.

And last but not least are Old Davis & buldozer b, you will not know what they have been doing unless you attend and find out about the (lab)caches they are preparing for you.

Of course, there will be also, too many to mention now, all the volunteers that will assist you during the geocoinfest.

We all look forward to welcoming you! 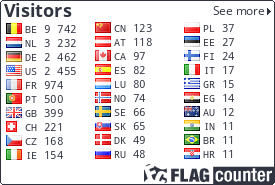